If you're going to sit down, make sure to have anything you want so do / read  / knit within easy reach *before* the critters pile on. And remember that the window of opportunity greatly shrinks the colder it is.

No way can I reach that bag of knitting way out past the toes.

Also - first day we've turned on the fireplace, which also means that "first fire of the season" stink as it burns off any dust, cobwebs etc...   Daisy is in heaven - she loves the fire.

Give it to us!

Daisy and Doogie love broccoli. I don't know that they prefer it picked fresh from the garden over store bought, but they sure are enthusiastic when I bring it in... 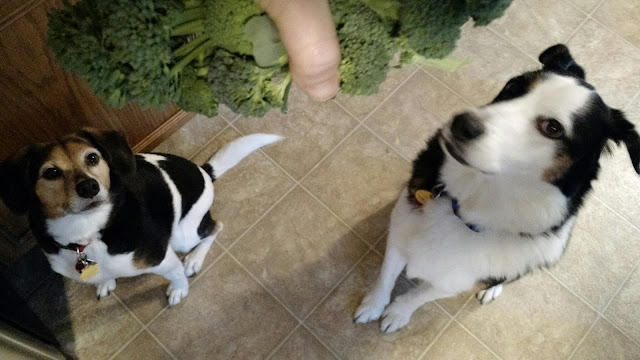 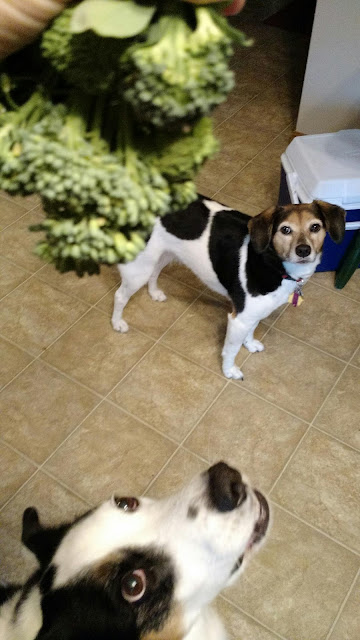 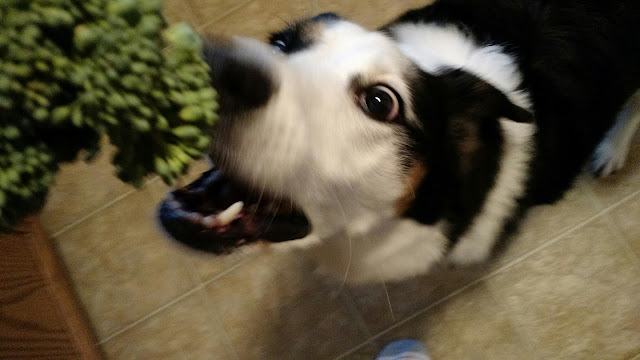 Got a good number of quirky gourds and pumpkins. Not as many gourds as some years, but this mix of seeds were for bigger varieties than I usually grow, plus there was a lot of competition with the cucumbers and weeds. 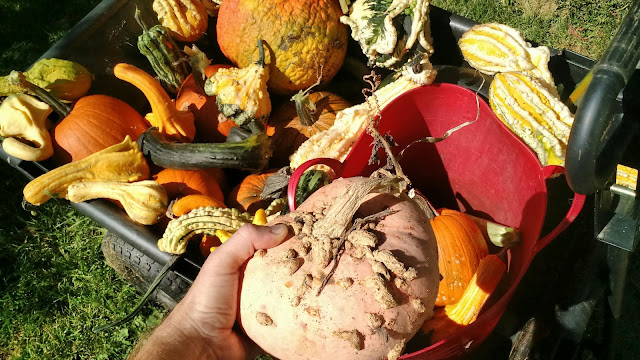 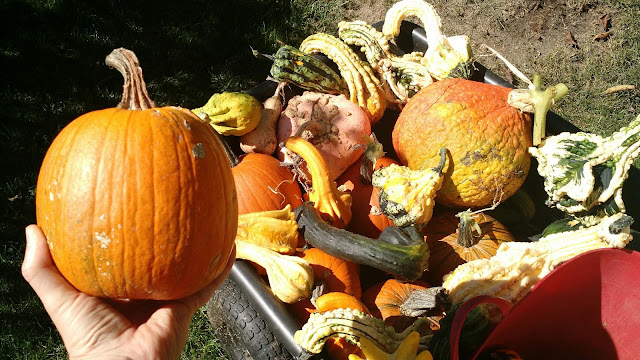 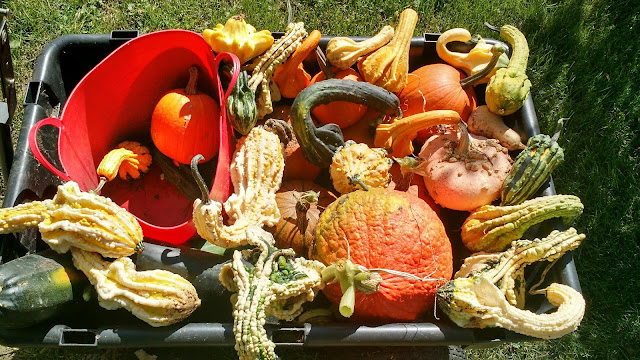 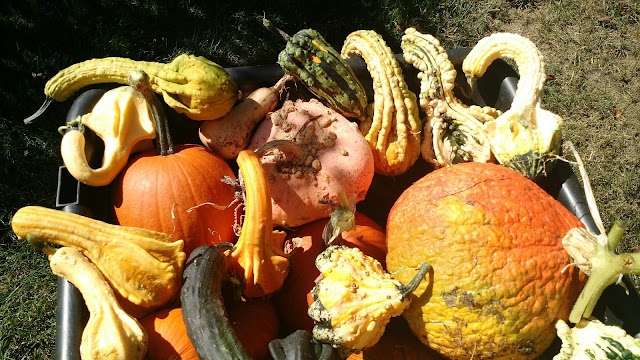 Email ThisBlogThis!Share to TwitterShare to FacebookShare to Pinterest
Labels: gardening

Call them bierochs, or bierocks, or from what I've seen elsewhere online, runzas...these are tasty little pockets of hearty goodness that I enjoyed when visiting family members in Kansas as a kid.  I remember my Grandma Catherine would make them up to take out to Grandpa and the hired hands working out in the fields as part of lunch (often with other yummy stuff, all packed in the trunk of the car).  Grandma Dorothy (dad's mom) would also make them - and I'm sure every family had subtle variations to the recipe. 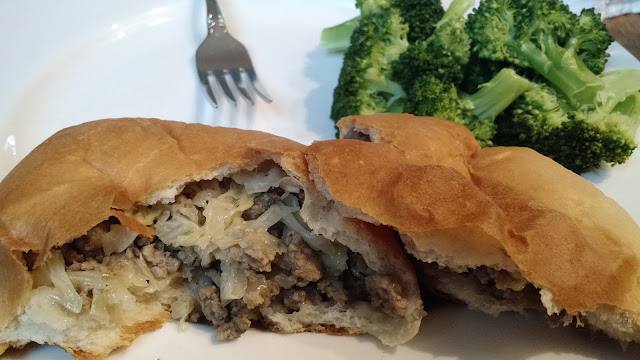 I haven't made, or had, bierochs in years.  Brett doesn't love cabbage, and would usually turn down anything that included it in a noticeable way.  Plus they're a bit of work - making the dough, cooking the filling, assembling, rising, etc...  But then I pulled this beauty out of the garden this past weekend... 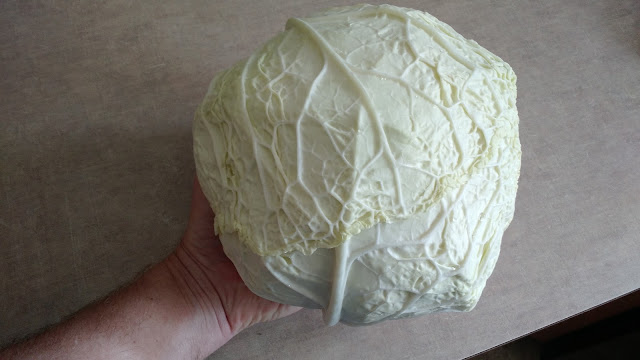 ...and I knew I had to do something worthy with it!  After some searching around, I settled on this recipe:  http://www.balticmaid.com/2014/03/bierocks-volga-german-meat-pastries/ 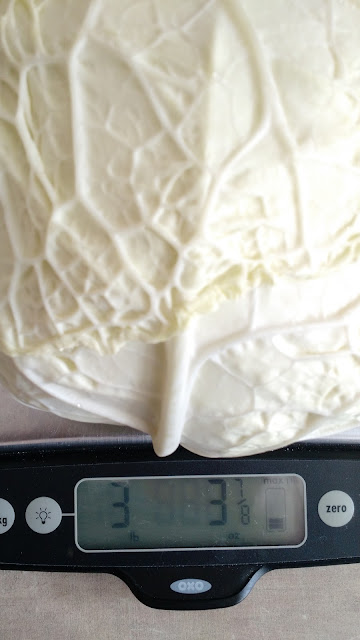 I worried a little bit when I sliced into it - I already had made the dough the afternoon before, and had it out of the fridge coming back to room temp so it could rise a bit more.  Then I sliced into what felt like a really hefty, dense cabbage only to find the core was a bit loose and chunky.  Would I not be able to get enough shredded cabbage for the recipe? 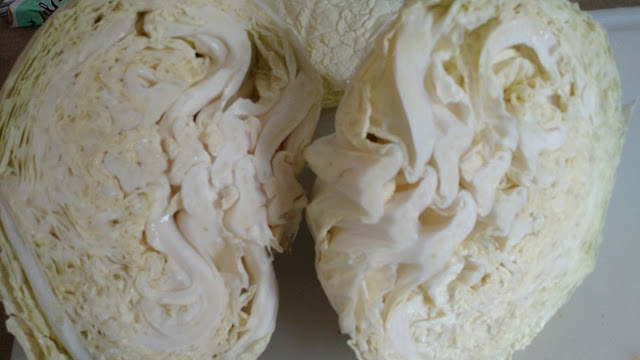 Good news!  While the recipe is a bit vague on how much cabbage you need (some recipes call for a specific number of cups, while this just called for "about half of a medium cabbage") - I felt I had plenty once I started slicing it. 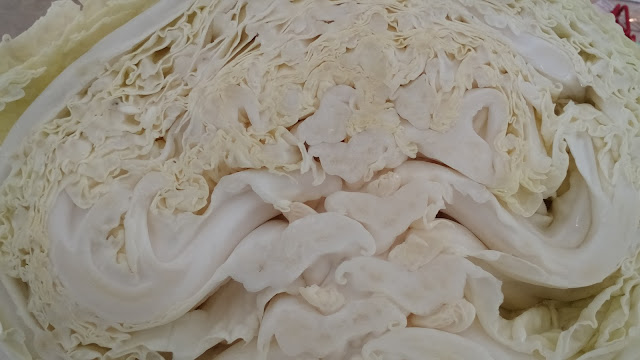 It took me a little while to get into the groove of filling/forming the bierochs.  The recipe has you cut the dough into fourths, and then each of those blobs into fourths.  My first four were a bit ugly.  Each group of four improved - here's my last four.  I finally found what worked best was to roll the dough out, put on the blobs of filling, use a brush wet with water to moisten the outside edges and then a + sign through the middle, and then cut with pizza roller.  Cutting first and then moistening edges just made extra work, and was often more sloppy. 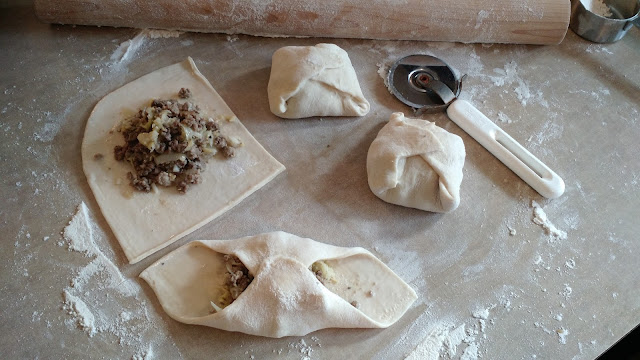 Look at them all gathering on the cookie sheets! 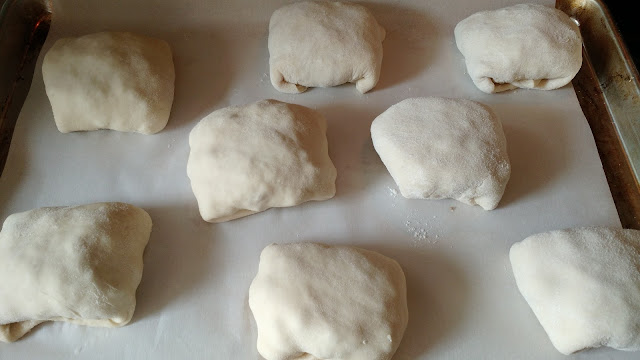 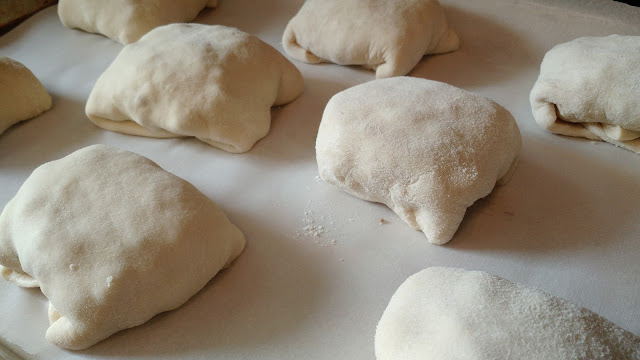 After they were assembled I let them rise, covered, in the warm oven for about 25 minutes - until nice and puffy - then I brushed them with milk while the oven came up to temperature. 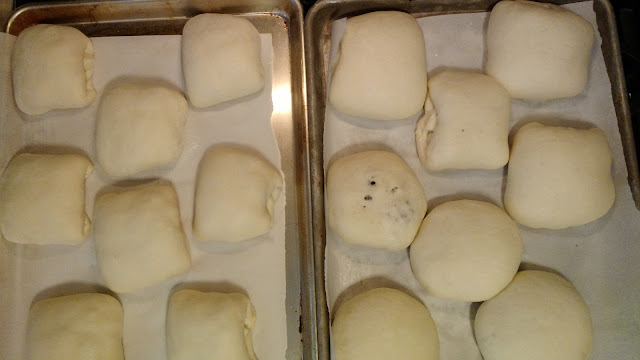 About halfway through their baking time I flipped/rotated the cookie sheets to ensure more even cooking.

Yummmmmm....  Good ol' comfort food, which takes me back to my childhood! 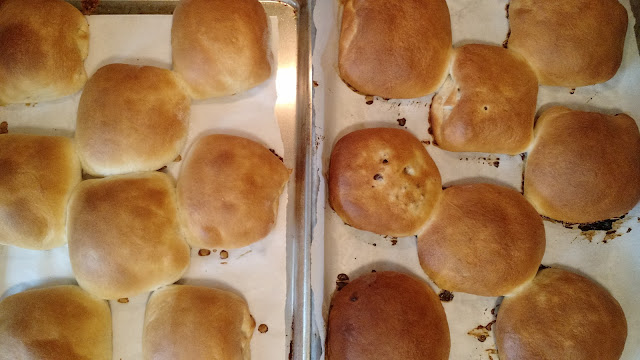 And the verdict?  Brett even liked them!  I honestly hadn't planned on them being our dinner, or him even eating one for that matter.  But he reminded me he eats cabbage when I put it in beef and veggie soup (it cooks down a LOOONG time in that), and that he would try them.  Granted, he mixed up some sort of English gravy/sauce powder for dipping his in (cheesy sauce maybe?), but he said it was really good!  He was really impressed with the bread dough, and said I should do more things with it. 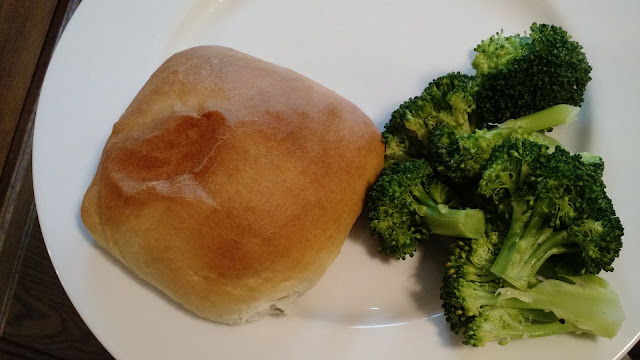 Right now all of them are packaged up in the fridge.  Some will go into the freezer at home, and I figure I'll stash some in the work freezer so I can pull one out to nuke for lunch every now and then.
Posted by Jeph at 6:45 AM No comments:

I'm under this fuzzy mess. 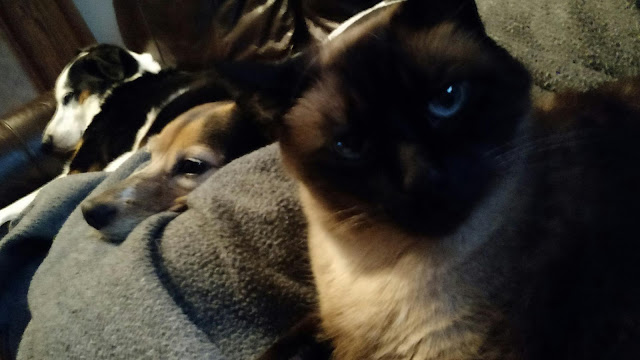 Email ThisBlogThis!Share to TwitterShare to FacebookShare to Pinterest
Labels: critters

Email ThisBlogThis!Share to TwitterShare to FacebookShare to Pinterest
Labels: critters

Alright girls - everybody in the pool!

We've been out of the amazing chicken stock I made from stewing hens for quite awhile now. I don't remember if it's been a year or more since I made it, but we loved that stuff.

Knowing a three day weekend was coming up, and we had no plans to go anywhere or do anything, I checked with Ami at Breakneck Acres and, sure enough, she has frozen stewing hens! I stopped in my way home after work the other day and she had my requested twelve birds waiting in a box for me.

Two days later and they're still frozen solid - sitting in the basement fridge for such a short time was not long enough for them to start thawing.

I started with adding seven large carrots, half a head of celery, maybe five halved onions, one large and a couple small heads of garlic, a palmful of peppercorns, maybe six cloves, and a good shake off salt into the large stock pot. Didn't bother peeling anything - the carrots and celery got ends cut off and a quick scrub, and the onions and garlic got the loosest skins removed,and the root ends cut off.

Then it was a game of frozen chicken Tetris - I know I've been able to get six birds in the stock pot before, although I think they were thawed, and their legs were stretched out more. These are a bit more boxy.

As you can see, after some shuffling around I got all but maybe and inch or two under water. As the bottom ones thaw, we'll use the potato masher to push the birds down more. I seriously doubt there's any risk of us getting sick from raw birds out of the water for a bit - they're going to simmer all day, and then will be pressure canned with really high heat.

I'll have to do a final total and some math to see what they actually come out to per pound, see how many quarts of stock we get, and compare that to the boxed stocks we sometimes buy.  Guaranteed this'll taste so much better! 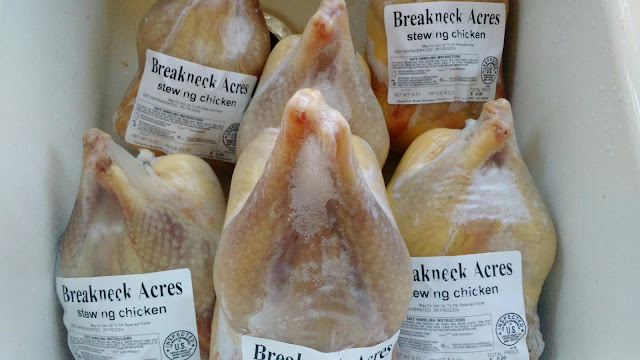 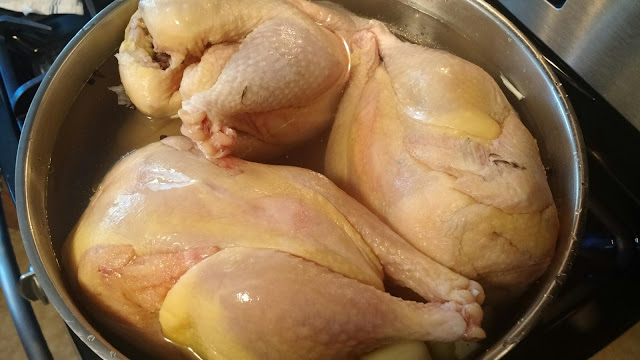 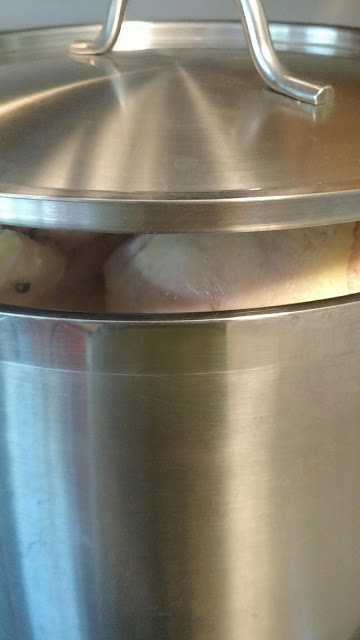 Email ThisBlogThis!Share to TwitterShare to FacebookShare to Pinterest
Labels: cooking

Nearly all of the tomatoes left on vines are the paste varieties. The most successful slicer is clearly chefs choice orange. In still getting a few others like black Krim, green zebra, stupice, brandywine and lucky cross. I suppose the decreasing production of those at least makes the quantities manageable!

Cucumbers are pretty much done.

Pulled some peaches, but they're very firm. The white faced yellow jackets don't want me to have the good ones. 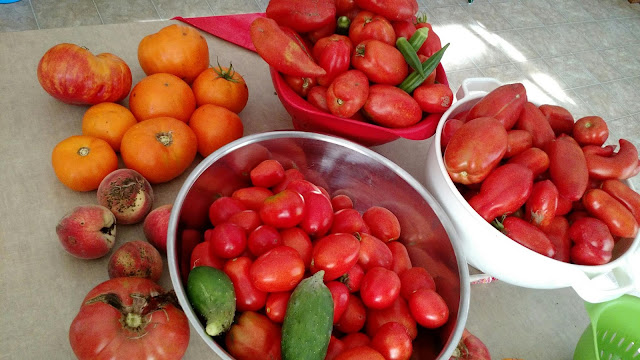